**This Faster-than-Fast-Food post brought to you by my sister, Laurie!**

When I was in college, one of my favorite meals from our little food court (affectionately knows as the Furman P-Den) was chicken caesar wraps. I haven’t thought of them in years, but all of a sudden last night I was consumed with the need to eat one again.

I was starting with raw chicken, so I used this method of cooking shredded chicken from Mel’s Kitchen Cafe. I went ahead and cooked four chicken breasts (way more than I needed) so that next time I had a hankering, I’d already have cooked chicken on hand. 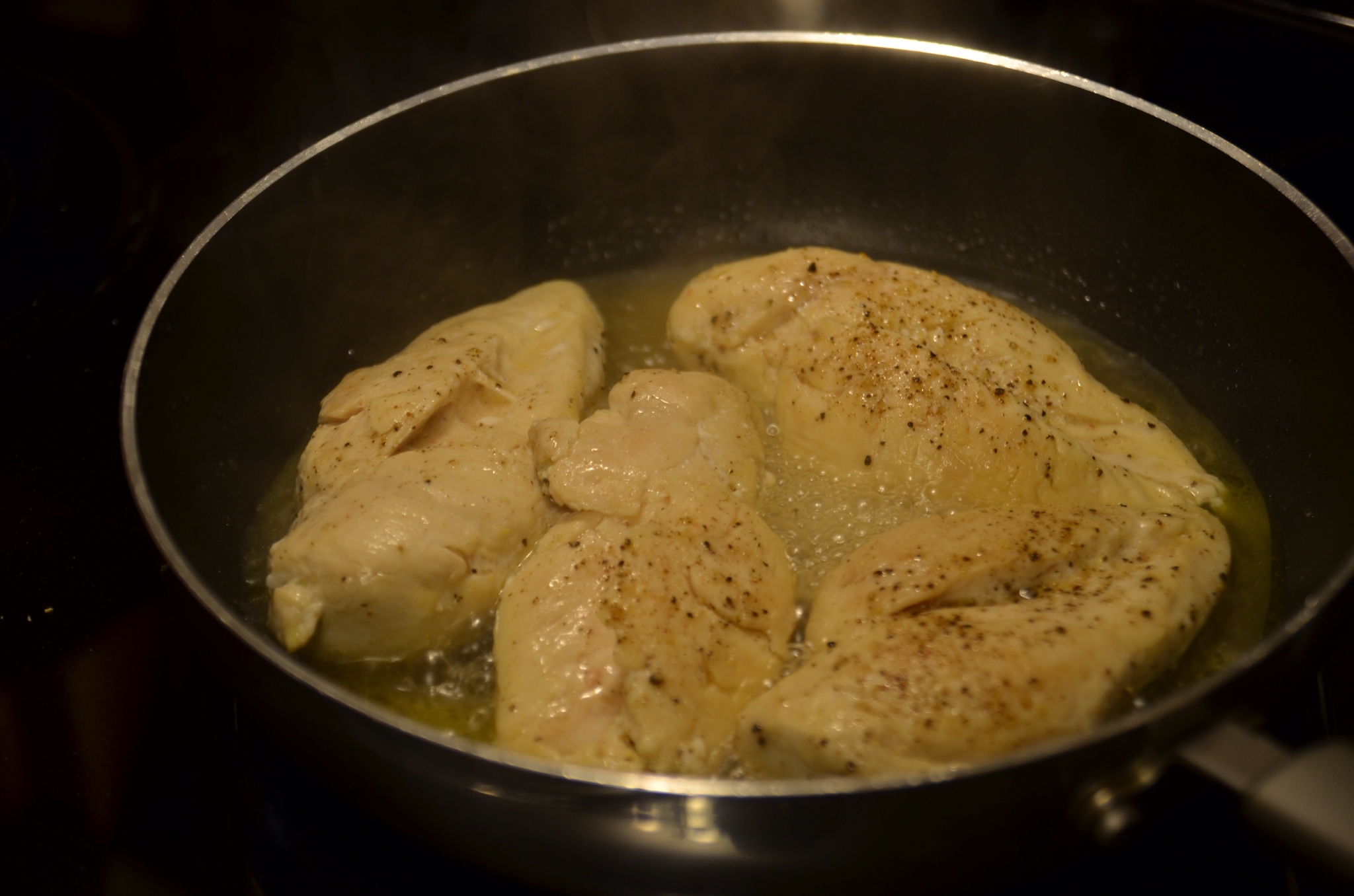 Mel’s method says it will take 12-15 minutes, which is doable but cutting it close. (Darn Bet and her 20 minutes including dishes rules!) I ended up cutting my chicken breasts in half partway through the cooking time because I was nervous about the timing. 😉

Here’s the cast of characters. Shredded chicken, chopped romaine lettuce (and I added spinach too, because why not?), Parmesan cheese, your favorite creamy Caesar dressing, and the secret ingredient… 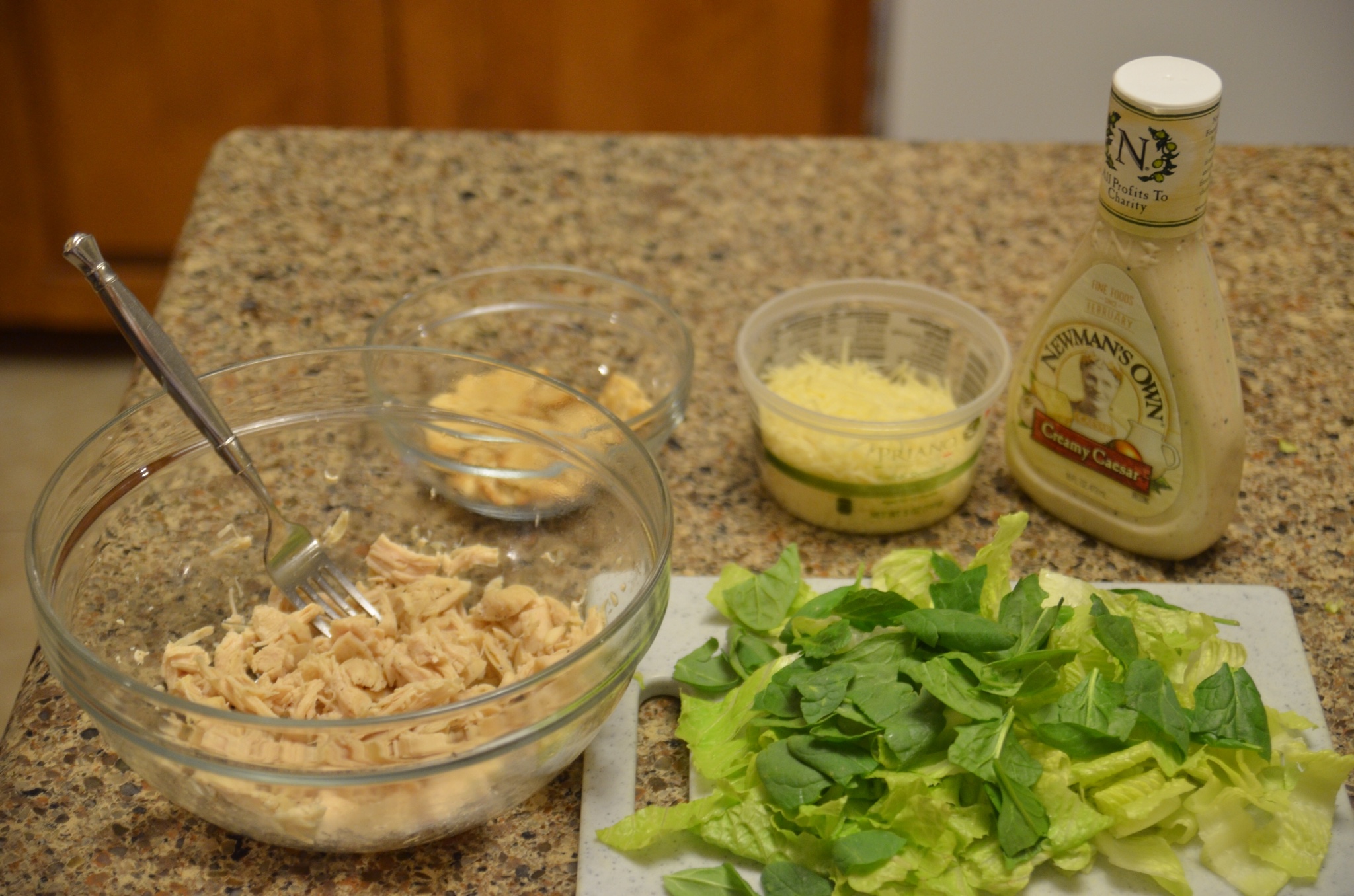 broken cracker pieces to add some crunch! You know, like how Caesar salad has croutons, but that wouldn’t work for a wrap. Enter the broken bits from the bottom of your cracker bag!

I made three wraps, and used one cooked chicken breast. Chop it up, and combine all your ingredients. This is basically just an eyeballing process. Want more cheese? Add some more. Love the idea of a crackery crunch? Sprinkle in some extra pieces. Drizzle the dressing over everything and give it a good mixing to coat evenly. (I started with a 1/4 cup of dressing and then added another dollup.) 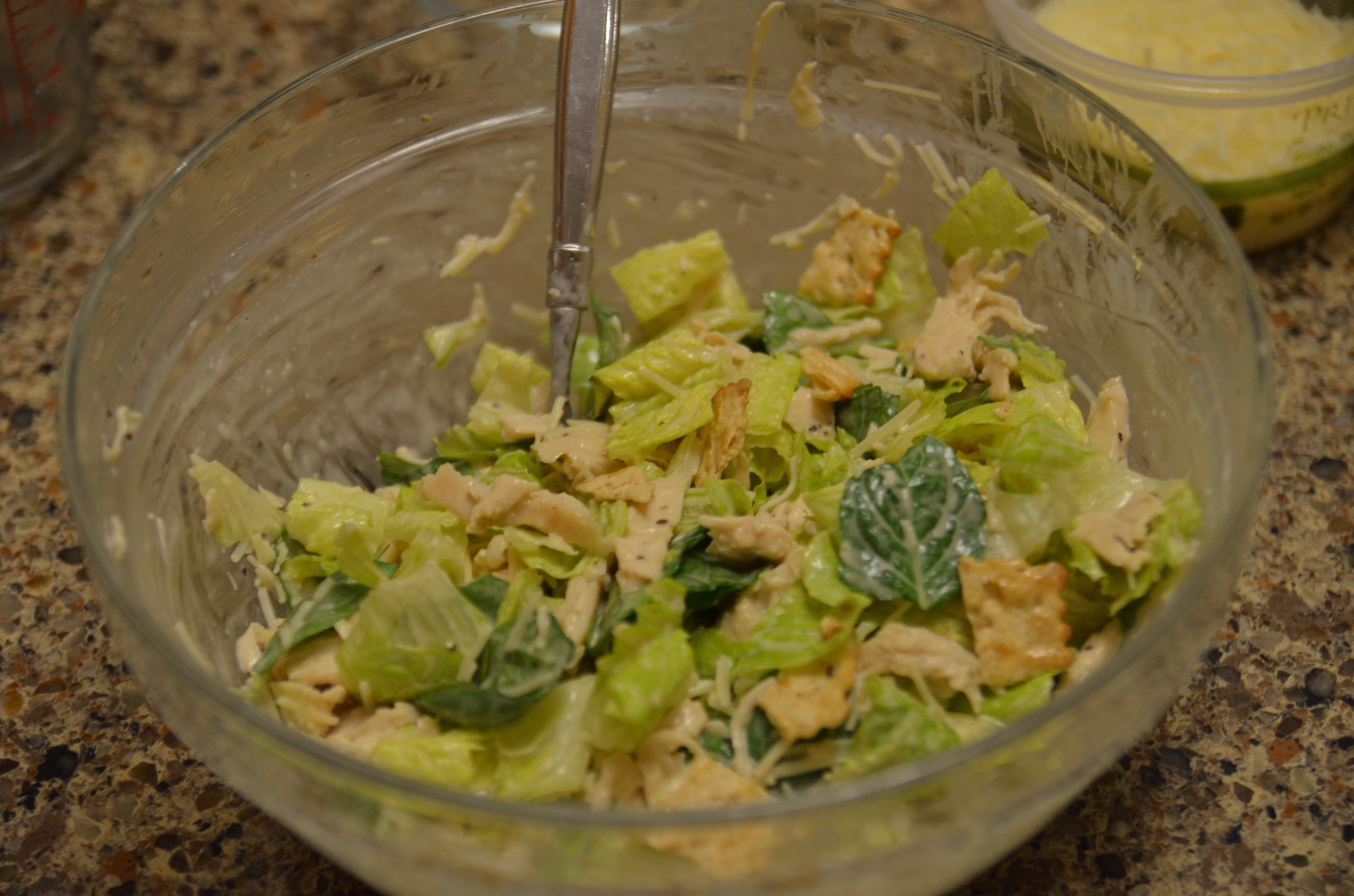 Then pile it on a tortilla wrap. You want a big pile, because it’ll scrunch down nicely when you wrap it. 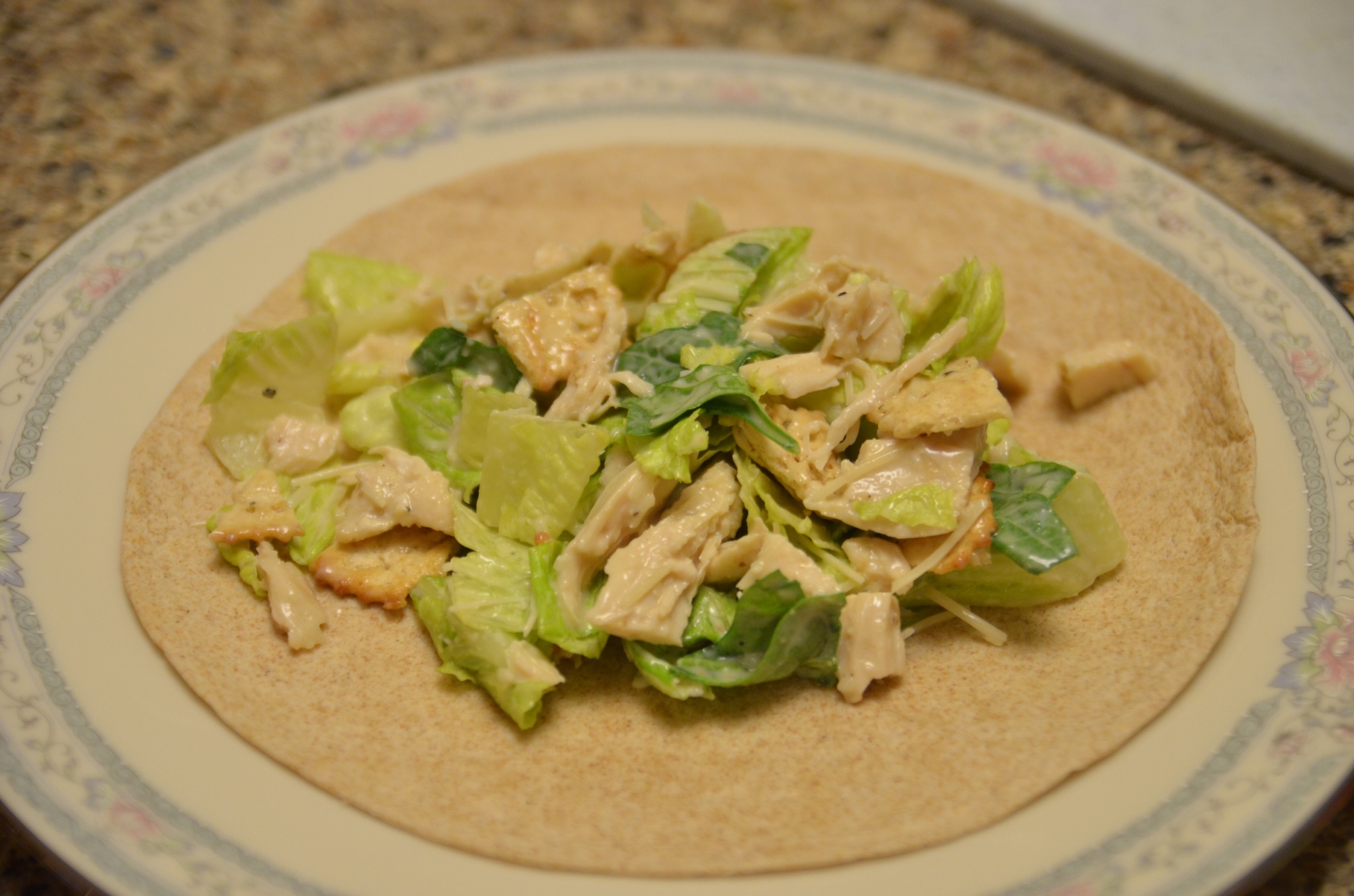 Wrap it tightly (I didn’t bother tucking the ends in like a burrito because it’s not that drippy) and enjoy! 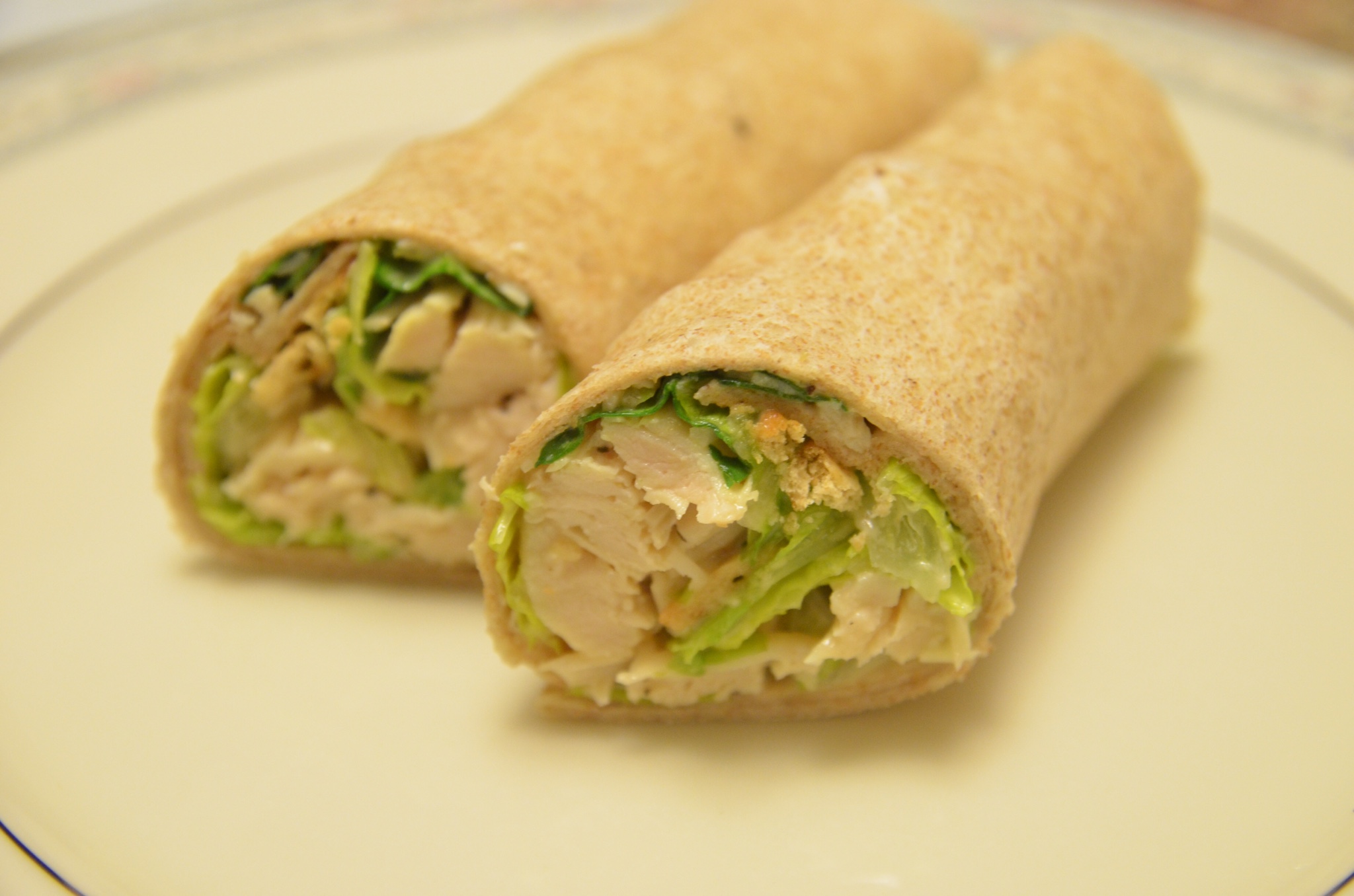 Now… you still have 3 other chicken breasts to shred and a pan to wash… but I don’t think you should have to count that toward your 20 minute time limit. Everything we’ve done so far has been Meal Cooking. But shredding that extra chicken surely counts as Planning Ahead and that’s a completely different category, right?! 😉

Probably-Goes-Without-Saying Note: If you cook the chicken right before you serve it, the wrap will be a little warm. If you are using pre-cooked chicken, everything will be cold. Proceed according to your preferences.

Also: Some of my children don’t believe in a meal like this where everything touches. But it’s easy to just set aside some lettuce, crackers, and bites of plain unadulterated chicken before you mix.

Posted with Blogsy
0
Sharing is caring!