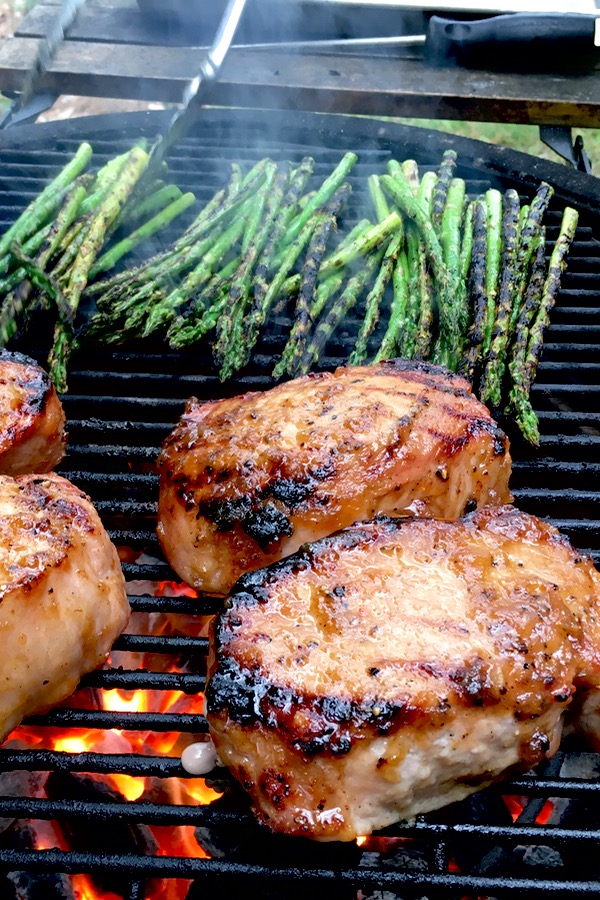 Grilling season never really ends here in NC, if you have/are a committed griller who doesn’t mind bundling up and braving the cold and dark through the winter – and thankfully, Jay is willing. And although I’ve internally cursed and externally whined about DST and the we-still-haven’t-recovered havoc it wreaks on my children’s sleep habits, I do love how the sunlight in the evenings is like an invitation to fire up the grill. As I’ve probably said an annoying number of times, moving as much dinner preparation outside to the grill as possible is my favorite!

My mom gave Jay a bottle of this Roasted Apple Grille Sauce from Stonewall Kitchen in his stocking at Christmas, and we busted it out last week on some pork chops. MAN, were they good! I was a little afraid it would be too sweet and fruity, but the sauce is a really good balance of sweet and savory, and awesomely chunky (you know there’s real fruit in it!). The ingredient list is normal things you can be happy about eating (roasted apples, maple syrup, dijon mustard…) and I love that you can use it as either a marinade or a sauce.

We actually used it as both – marinating some super-thick-cut pork chops from Costco in the sauce for a couple of hours, and then bringing the sauce to a boil so Jay could brush it on as the chops were cooking, and we could pass it at the table. The pork was so tender and I kind of wanted to lick the sauce off the plate!

We served our roasted apple grilled pork chops with asparagus (also on the grill) and some baked potatoes. Yum! This meal is definitely going to be on repeat. 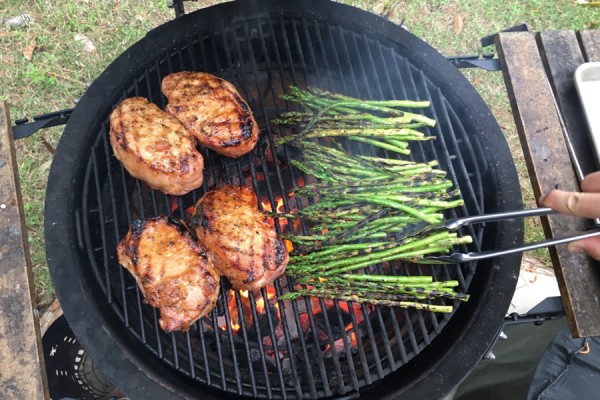 I think the Roasted Apple Grille Sauce would be awesome on chicken, pork tenderloin, or ribs. I’m going to be on the lookout for other Stonewall Kitchen products, too (our local Harris Teeter carries them – you can find a location near you here). Holler at me if you have a favorite we should try!

Please note that the prep time does not include marinating the meat!

We used the whole bottle of sauce to marinate the meat, and really enjoyed passing the boiled leftovers at the table to use as a sauce. If you’re not a sauce person, you can be skimpier with the sauce in the marinating step and not use the whole bottle.

This is not a sponsored post – just a PSA about a product we really enjoyed!