This is the soup that I promised to tell you about in my March meal plan. Whoopsies. It’s SO PERFECT for using your leftover Easter ham, though, right? ;o)

I may or may not still have leftover ham from Thanksgiving in my freezer. I realized a few weeks ago that I needed to be a little more proactive in using it up, so I pinned some ideas and came up with this recipe from two similar ones from Damn Delicious and Cooking Classy. We’ve had this ham, potato, and corn chowder twice now, and my three-year-old didn’t even pick anything out! A-mazing. Even my littlest girl had some of the potatoes on her tray. It’s rich-tasting and creamy (but not heavy), with hints of smokiness from the bacon and sweetness and texture from the corn – yum.

First, you need bacon. Four pieces is good – six would be better. Somehow we didn’t manage to have leftover bacon for our leftover soup. Portion control is not my strength. I use kitchen scissors to snip the bacon into little pieces so it’s easy to stir around and cook. It surprised me that neither of my “inspiration” recipes used the bacon grease – I love the flavor it adds to the finished soup! I poured off some of the fat, leaving a couple of tablespoons in the pot to cook the onion and garlic. 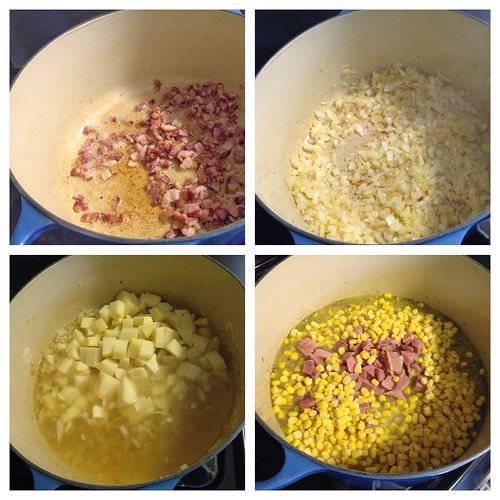 While the veggies are sizzling, peel and dice up three potatoes, and add them to the pot with chicken broth, thyme, and salt and pepper. Cover and cook for about 20 minutes, until the taters are tender, and then add ham and frozen corn!

The chowder gets its creaminess from a quick roux. You know I try to avoid extra dishes, but in this case it’s worth it since it saves you from having an already-thickened broth sticking to the pot and burning while you’re boiling the potatoes. There are No Photos of the roux-making process because once you get started, you have to whisk and watch, but it’s not hard! You can make it quickly while the potatoes are cooking. 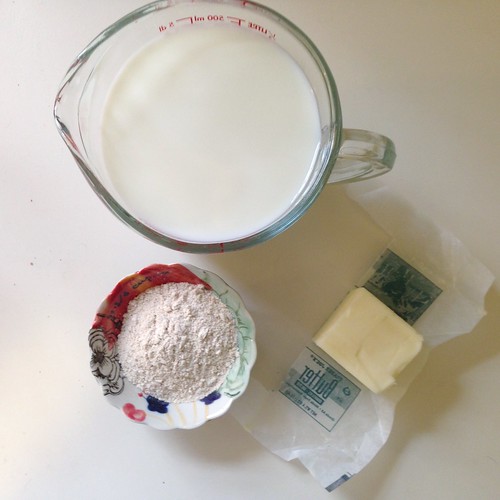 Pour the thickened butter/flour/milk mixture into the soup, give it a stir – and dinner is ready! 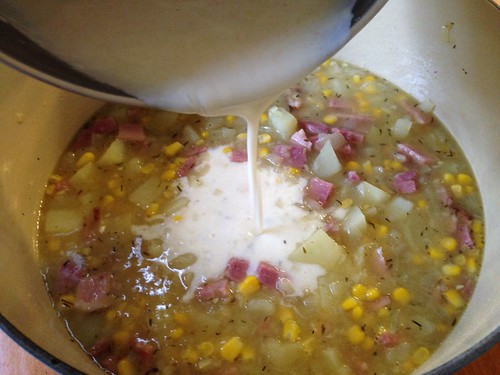 Well, except for copious amounts of shredded cheese and more than your fair share of bacon, that is. 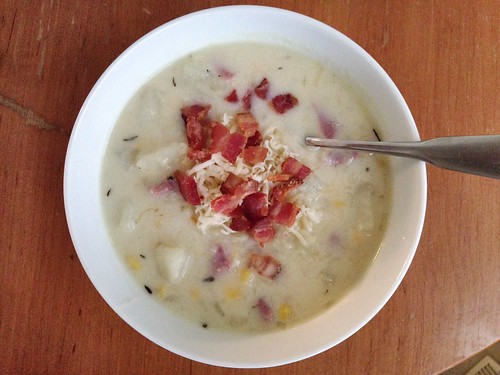 Oh, and if you’re a fan of Nana’s Potato Soup – there’s definitely room for both in your rotation. This is a creamy chowder-style soup with chunks of potatoes, ham, and lots of corn, and Nana’s is potato, potato, potato. Both delicious!